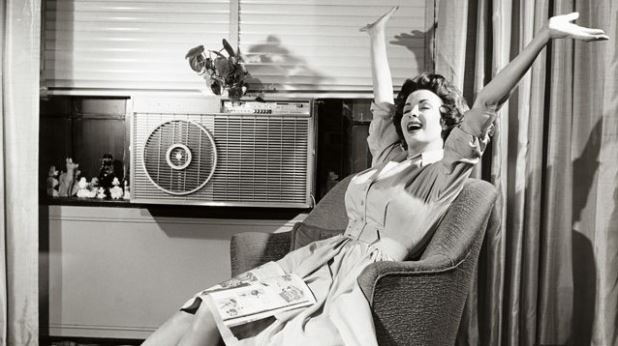 The Air Conditioning Unit is one of the most amazing inventions of all time, aside from cell phones I think!

Here’s a quick fun timeline on how AC units came about.

1851 – Mechanical Refrigeration Begins
Started by Dr. John Gorrie, he created a machine that created ice using a compressor powered by a horse! He used water, sails and steam also. He successfully demonstrated ice cube creation ability in 1848 and was granted a patent for the design in 1851!
​

1904 – People Experience Public cooling
At the St Louis World Fair, they put to use the first mechanical refrigeration units to the cool the Fair building. Americans begin to realize the luxury of ‘comfort cooling’!
​
1906 – Air Conditioning defined!
Mill Owner Stuart Cramer uses the term ‘Air Conditioning’ in one of his patent claims to describe the feeling of cool air and changing the humidity. The term was official published in text books in 1908.
​
1922 – Carrier Invents Chiller Machine
William Carrier invented the centrifugal chiller, which had much less moving parts and compressor units and stages. The new system increased AC reliability and lowered the cost of large scale Air Conditioning units which allow a surge in AC unit sales and growth!
​
1928 – Refrigerants Created
Thomas Midgley, Albert Henee and Robert McNary – working for General Motors at the time, created a synthesize called chlorofluorocarbon (CFC). The chemicals were the first non-flammable refrigerant coolants. This greatly improved the overall safety of AC units.
​
1929 – Room Cooling Systems Arise
Fridgaire introduces the first portable room cooler to the market. Later Frank Faust improves on the design and and develops a self room ac unit. They produce over 30 prototypes between 1930 to 1931!
​
1931 – Window AC unit created
Inventors Schultz and Sherman file a patent for the first ever ac unit that can be placed on a windows edge! The newly designed units hit the market in 1932 but do not sell that well do to the high costs. Fridgaire that same year starts marketing central AC Air for homes.
1947 – Low Cost AC units become available
Engineer Henry Galson designs and creates an affordable ac unit that reduces production and build times. 43,000 of the units are sold this year in the United States!
​
1991 – AC industry shift away from CFC Chemical
These were phased out due to damaging the ozone layer of the atmosphere. HFC (hydrofluorocarbon) take over instead because it doesn’t emit strong greenhouse gases!
​
1992 – Energy Department Sets Energy Standards
Standards are set in place to reduce energy waste which resulted in a 29 billion dollar energy saving from 1193 to 2023 as the result!
​
1998- Advance Refrigerant Developed
Oak Ride Laboratory develops a heat pump for AC units. This helps solidify 410a as the leading refrigerant in AC units and also helps improve energy efficiency!
​
2006 – New Energy Standards in Play
New Requirements are released for Central AC units in the United States. These new standards will prove to eliminate over 369 million care gases which is the same as 72 million automobiles.
​
2015 – Next Generation AC Technology
US energy Department announces to non-vapor compression and emission technology that do not require coolants. This will play to be a game changing shift in the AC industry!